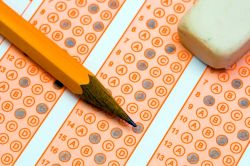 Usually I'm pretty calm during testing season. The worst part of it is how ABSOLUTELY BORED OUT  OF MY MIND it makes me. Have you checked out the Love, Teach blog? Holy smokes, she hit the nail on the head! Read her post about it here.

I pass out the tests, I read aloud the directions (and in my head, I crack up the whole time because the words and the syntax are just ridiculous. No one talks like that), and I make the students do some breathing exercises to calm them down and get rid of any distractions that might still be in their brains (the theme song to Spongebob Squarepants, perhaps?). Then - the test begins.

AND I AM BORED TO THE POINT OF INSANITY. For the next two or three hours.

Then I circle around again, making sure everyone has a good eraser on the tip of their pencils. If not, I bring them one from my eraser drawer. (Yes, I have one of those.)

Then I circle around again, making sure that they have a backup pencil. If not, I bring them one from my pencil drawer. (Yes, again.)

That has taken up all of 8 minutes. Each testing segment is 70 minutes. We have two testing segments. Every day. For five days. It's at this point each morning when I realize it's going to be a long day.

I do something different each time I circle. Sometimes I pat them on the back. Sometimes I sing their names (silently, in my head of course) to that Banana-Fana-Fo-Fana song. Sometimes, I try to say their whole name backwards. Sometimes I try to picture them 10 years from now.

Of course, the whole time I'm making sure they're bubbling in the correct section.

As if this in itself is not enough of a nightmare, I had an actual nightmare about it last night.

Our big test is two weeks away. We are about to start reviewing our year from August until now. Yikes. Anyway, we're hittin' the review hard, folks. I don't like to review for a month because OH MY GAWD. I'd rather spend my time teaching it well up front and reviewing at the end instead of rushing through everything in order to have eons of time to review.

So today, I'm planning my review. That must be why, last night, I had the nightmare. Here's how it went down:

It's Wednesday. The math test. Reading and language arts are out of the way. We are about halfway done. I am feeling confident.

I pass out the test booklets. I read the directions (again, laughing like crazy in my head). Then, I start to READ THE MATH PROBLEMS OUT LOUD TO EVERYONE. This is a NO-NO, people! No way, Jose! Bad, bad bad! Illegal! STOP! DO NOT PASS GO! I couldn't believe I was doing that!

I wasn't even reading them out of a teacher manual; I was hunching over a student to read them out loud. After I read the question, the kids started to huddle up and discuss the problem. "Well," one of the darlings said, "the problem with this question is that there is irrelevant data. We need to sort through everything provided to see what we actually need and what serves as a distraction." I should have known RIGHT THEN that this was a dream! I do encourage thinking like this, but not one of my eleven-year-olds talks like this!

Now, dream-me knew that the kids weren't supposed to discuss the answers and processes for solving questions on these big standardized tests. (Why dream-me didn't know not to read the questions is beyond me.) So, I started yelling at them. "STOP! You can't discuss this! What on earth are you doing?"

Another darling said, "Mrs. Thompson, you encourage us to talk things out. Why should this be any different?"

"BECAUSE," dream-me screeched, "IT'S NOT ALLOWED! DON'T YOU KNOW THIS IS A STANDARDIZED TEST?!?!?!?!?!!?" I'm pretty sure I was jumping and pulling my hair out as I was screaming this at them.

The darlings all looked at each other, shrugged, and kept on discussing. My hissy-fit continued until I heard rapping coming from a backpack. That can only mean one thing. Cellphone.

The darlings know how I feel about cellphones going off in class. The talking stopped immediately. I marched over to the backpack that was rapping and pulled out the cellphone. The darling to whom the rapping backpack belonged was mortified. (In real life, not just dream life, I've confiscated his phone more than once.)

"Hello?" I asked with just a hint of drama queen.

"Uh, yeah is [insert darling's name] there?" the grown man on the other end of the line asked.

"Yes, he is. This is his teacher, Mrs. Thompson. You just called and interrupted a very important test that he has to pass. What do you have to say for yourself?" My hand was on my hip as I spoke.

Nothing. Not even crickets.

I continued. "And why, may I ask, is a grown man calling an eleven-year-old during school hours on a school day? Just who do you think you are? Don't you know he's supposed to be in school? How important is this phone call right now? Does his mother know you are calling? Why aren't you at work?" Oh lawd.

He apologized very quickly and hung up. I turned around in a very sassy way and put the phone on my cabinet. The darling in question was still mortified, which satisfied me. I was about to restart the testing when the kids started freaking out over the phone call.

Dream-me climbed up on a table and started shouting at the kids. I mean, full on SHOUTING. I threatened to get the principal. And just as I was yelling really good, the principal walked in.

That's when I woke up.

Do you know that moment when you've had a nightmare and you've just awoken, and you wonder if it was real? That was me. I was in a panic. Then I realized I'd been dreaming, I laid back on my pillow, and I prayed for an easy testing week when it comes.

I still have two weeks until our big test. I can only hope that the nightmares don't get any worse the closer we get. 'Cause that one was a doozie.