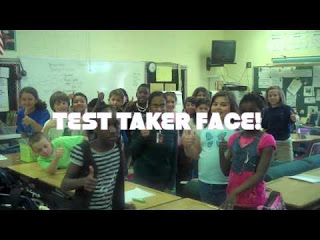 I got an email telling me that my class's video from two years ago is going viral! That sounds great, right? I still just can't stand the term. It makes me feel like I should go wash my hands...

But that is really exciting! Have you seen my Test Taker Face video yet? It's an encouraging music video about doing well on the big end-of-year test (in our case, the CRCT). It was based on the Lady Gaga song, "Poker Face."

Two years ago, I showed my students some other CRCT videos on YouTube. My students said, "Mrs. Thompson, we can do that!" So we decided to do it. In three days, we made the decision to make a video, I wrote the lyrics, the kids choreographed it and decided how to film it, and boom - we had it finished by the end of the third day. This also included learning the lyrics, singing it, making an audio recording, and editing the dang video. Whew! Talk about a whirlwind!

We actually received a little bit of negative feedback, telling us that it showed the kids too fast. My students really wanted to show all the students in the school because they said the video was for them. So yes, some of the clips go by super fast, but I was proud of the students' idea!

The kids LOVED it and I had wonderful support at school. It was so much fun! If you haven't looked at it yet, please check it out. I still see the kids from that fifth grade class, and they still talk about how much fun making that video was. I'm pretty sure that they think they're celebrities ;)

Another class made a video based on Taio Cruz's "Dynamite" - called Rock This Test! It doesn't have as many hits; could you help us out with that? ;) (Shameless plug)

And of course, best wishes to all teachers out there who are entering the testing season!
Posted by Dallas at 8:44 AM
Email ThisBlogThis!Share to TwitterShare to FacebookShare to Pinterest
Newer Post Older Post Home